We’re back with the second entry of the Quick Fix Series. In our first installment, we looked at one of the newest schools in Texas set to open in the fall of this year – Alvin Iowa Colony.

We’re going to flip gears and check out a school that’s been around for more than 90 years, and that would be Seagoville, which is part of Dallas ISD.

Seagoville has quite the logo, and not in a good way. The big one below is a remade version of the real one, and even the remade one is a hot mess.

There are three elements to this logo, which includes a generic, blue script in front of a block S in front of an overly-detailed dragon. There are no less than eight colors on this dragon, which make it damn-near impossible to replicate outside of a digital medium.

Here is the original, which resides on the school’s Facebook page as of October 2021 as well on the header of the website.

Googling “Seagoville Dragons” doesn’t help the situation either, as the lack of high-quality logo and actual direction made it quite difficult to handle this school’s portion of our site when it started.

Ergo, the updated version is actually a commissioned work we asked for through Fiverr. (We have the receipts).

This one comes from a Google Site. 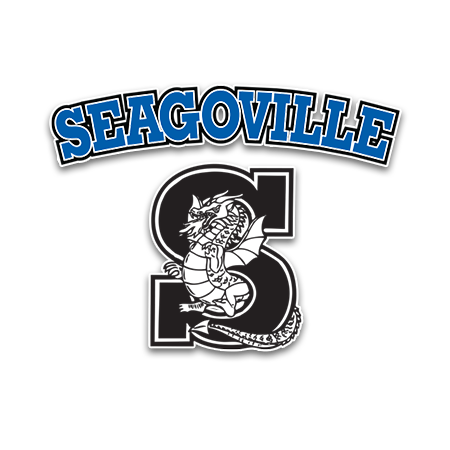 Scorestream, via the Dallas Morning News, uses this one.

And plenty of other imagery, such as pictures inside the school, show vastly different uses of dragon mascots.

Even the middle school logo is clean and far superior than the high school’s logo.

But the middle school logo leads us in a great direction. It’s simple, easily replicated and creates a solid, unified identity, and that’s what a logo is supposed to do.

So here is our take on the Dallas Seagoville Dragons logo.

We leveraged the blue and black from the middle school logo and kept a flat logo that can be easily put on shirts, flyers and athletic wear.

We also added gray to the tail and as fire breath to A) incorporate a tertiary color to the scheme and also provide balance on both sides of the dragon/S.

Making the dragon into an S seemed like a no-brainer since the a lot of depictions of dragons show very curved bodies. The black within the body is meant to give some depth within the turns of the body.

So that’s that. A completely overhauled Seagoville logo that greatly reduces the amount of colors and logo elements and increases the simplicity and visual impact. There would be no mistaking this logo with any other school in the state.

Let us know in the comments what schools should be part of this series. We have a good list to start but appreciate the input.